AmCham Philippines' November 2015 meeting discussed how the Philippines can have more climate- and disaster-resilient urban infrastructure. 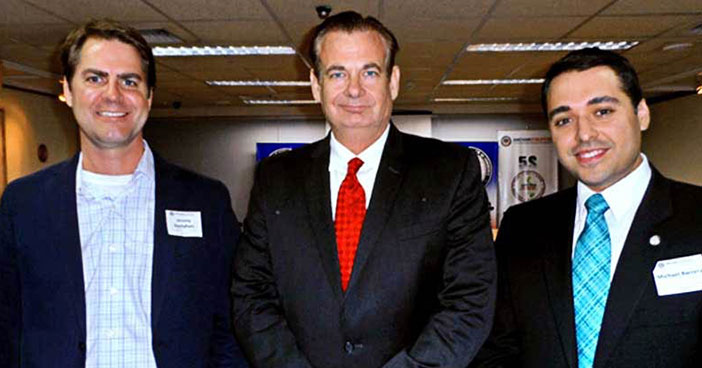 From left to right: Jeremy Gustaffson, Director of the Office of the Environment, Energy and Climate Change of USAID in the Philippines; James Donovan, President and CEO of ADEC Innovations and Co-chair of the Environment and Urban Development Committee of AmCham; and Michael Barrera, Vice-Consul of the American Embassy in Manila.

The Environment and Urban Development Committee of the American Chamber of Commerce (AmCham) tackled Climate-Resilient Urban Development in the Philippines in its committee meeting held last November 23, 2015.

Facilitating the discussion on how the Philippines can have more climate- and disaster-resilient urban infrastructure were Mr. James Donovan, CEO of ADEC Innovations and Co-Chair of the Committee, together with Mr. Ebb Hinchcliffe, Executive Director of AmCham Philippines.

The first speaker, US Embassy Manila Vice-Consul Michael Barrera, discussed the existing environment initiative of the Green Team internal and external stakeholders to promote green living in the community. He also talked about the importance of engaging employees and fostering volunteerism towards environmental and social responsibility.