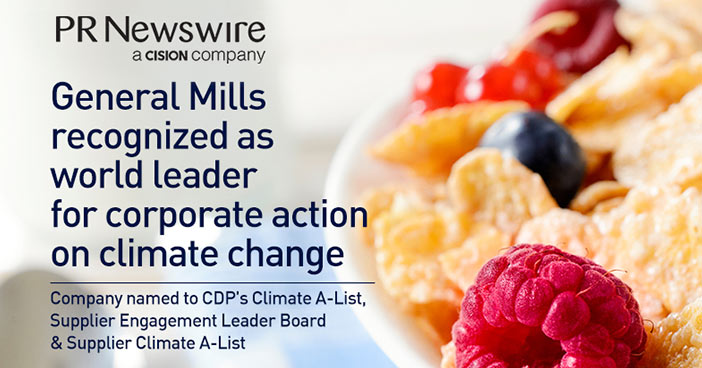 MINNEAPOLIS, Jan. 26, 2017 /PRNewswire/ — General Mills has been recognized as a global climate leader and has been named to the CDP (formerly the Carbon Disclosure Project) Climate A-List, Supplier Engagement Leader Board and Supplier Climate A-List. The company is among the 9 percent of global corporations participating in CDP's climate change program to be awarded a position on the Climate A-List, in recognition of its performance and actions to reduce emissions and mitigate climate change in the past reporting year.

"We are pleased to have our ongoing climate work recognized by being named to CDP's Climate A-List," said Jerry Lynch, chief sustainability officer at General Mills. "As a global food company, we depend on nature's systems to make the food people love, so it's vital that we continue to make steady progress toward our ambitious climate, GHG and water commitments.  We know that one company alone can't negate climate change, but working in cooperation toward aggressive goals is how we will start to see more meaningful results."

The Climate A-List, which establishes the baseline for corporate climate action, reveals that global corporations have begun transitioning to a low-carbon economy and progress on reducing emissions in line with the goals of the Paris Agreement will be tracked against this baseline in future annual reports.

"We congratulate the 193 A List companies that are leading the charge towards our low carbon future," said Paul Simpson, chief executive officer of CDP. "Companies are key actors in enabling the global economy to achieve its new climate goals, and the leadership of this group points the way for others to take bold action and capitalize on the many opportunities that await."

The Leader Board recognizes General Mills as one of 29 companies across seven industries whose processes were considered best practices in governance, ambition, upstream emissions management and supplier engagement. The Supplier Climate A-List places General Mills among the top 3 percent of participating corporations being recognized for engaging their suppliers to reduce emissions and mitigate climate change in the past reporting year.

The Supplier Climate A-List, which has been produced at the request of 89 purchasing organizations with a combined spend of $2.7 trillion, includes 112 companies who meet the rigorous standards. Over 4,300 companies submitted annual supply chain climate change disclosures to CDP for independent assessment against its scoring methodology. A high score signals that a company is measuring, verifying and managing its carbon footprint.

"Companies that put climate data at the heart of their business will be best placed to capitalize on the transition to a low-carbon economy," said Robert Francisco, president of ADEC Innovations. "This achievement is testament to General Mills partnership with its customers to make the commitment to environmental stewardship and demonstrate a superior approach to climate change mitigation. As CDP's sustainability outsourcing partner and supply chain scorer, ADEC Innovations congratulates General Mills for being recognized in the top 3 percent of suppliers as part of CDP's Supplier Climate A-List."