Although the answer may seem obvious to biologists, ornithologists and avid bird watchers - based from my discussions among colleagues, friends, family and the general public - the answer may not be so obvious after all. It is a common misnomer to think that the common name of a species is indicative to their specific physical trait or behavior. However, the colloquial names of animals do not necessarily give their exact distinctive trait . One thing is clear though, burrowing owls definitely nest in burrows. But do they build these burrows themselves? Let’s find out more about the burrowing owl and their natural habitat. 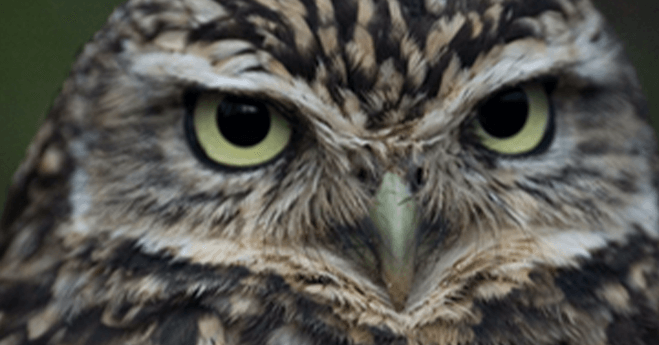 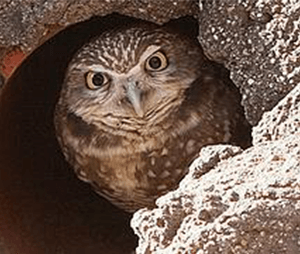 Although the answer may seem obvious to biologists, ornithologists and avid bird watchers - based from my discussions among colleagues, friends, family and the general public - the answer may not be so obvious after all.  It is a common misnomer to think that the common name of a species is indicative to their specific physical trait or behavior. However, the colloquial names of animals do not necessarily give their exact distinctive trait . One thing is clear though, burrowing owls definitely nest in burrows. But do they build these burrows themselves? Let’s find out more about the burrowing owl and their natural habitat.

The burrowing owl (Athene cunicularia) is one of the smaller species of owls known to be found in the North, Central and South America.  In North America, burrowing owls are often seen in the state of Texas to southern Manitoba Canada, west of California to the eastern parts of Washington and Oregon, the southern parts of Florida to the Keys, and Mexico. It is a short ground-dwelling owl, approximately 7 &frac12; inches to 10 inches tall, with relatively tall legs, bright yellow eyes, and a buffy-white to brown coloring with barring on the wings and belly. The stare of a burrowing owl’s magnified round yellow eyes cannot be missed in a green or brown open field. Unlike other owls, burrowing owls are most active during the day, particularly early in the morning and at dusk when they are hunting for food. Burrowing owls are low flyers that hunt near the ground for arthropods like grasshoppers, small rodents, birds, amphibians, reptiles and carrion. They are typically found foraging and nesting in sparsely vegetated areas dominated by grasslands, pastures, disturbed areas and fallow fields. These owls breed on the northern end of their range in the U.S., generally from March to September.

Pairs begin mating in March and April, after a single clutch of eggs are laid and hatched. Their young will remain in the nest for about 6 weeks until it can sustain flying on its own.  During nesting season, burrowing owls become very protective of their nest burrow.  A family of burrowing owls will often occupy a cluster of satellite burrows when their young are about 3-4 weeks old, a period when they are learning how to fly. They move to a new burrow every 10-15 days in order to allow the family to stay ahead of any potential predators and help the young transition in sustaining flight to eventually leave the nest.

Burrowing owls generally nest in the same location for multiple seasons. They will forage over a large distance, approximately 300 acres during the breeding season. Once the young have left the nest, they can disperse up to 90 miles away to establish their own territory. During breeding migration, burrowing owls generally travel in opposite directions from their home territory. That is, resident owls in the southern portion of their range will travel north and vise versa. Owls that breed in Canada and northern states of the U.S. will migrate south to Texas, California and Baja Mexico during the winter months. 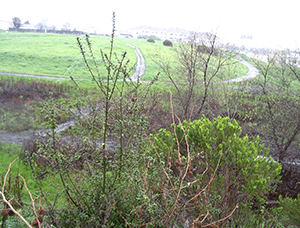 Since burrowing owls nest and take refuge in burrows of grasslands, prairies and agricultural fields, they are threatened by the conversion of open fields to development. This can result in habitat fragmentation and the loss of important foraging habitat for the owls. Other significant losses are caused by vehicular collision, pest control measures taken against burrowing rodents, and predation from species such as hawks, badgers, domestic dogs, cats and other owls.

Conservation Efforts in states such as California are focused on maintaining the foraging habitat and larger adjoining habitat of the burrowing owls. The continued habitat loss of the burrowing owl has resulted in its enlistment as Endangered in Canada and Threatened in Mexico. In the U.S., it is federally-listed as a Bird of Conservation Concern. At the state level, burrowing owls are listed as Endangered in Minnesota, Threatened in Colorado and as a Species of Concern in states such as California, Montana, Oklahoma, Oregon, Utah, Washington and Wyoming.

To answer the question at the beginning of this article, burrowing owls do not dig their own burrows. The name of the burrowing owls is derived from the fact that they inhabit the abandoned burrows of small mammals such as prairie dogs and ground squirrels. However, burrowing owls make certain improvements on the existing structure to suit their needs if warranted. In the vast grasslands and prairies of the Midwest, burrowing owls and prairie dogs inhabit the same area.  However, like their eating habits, burrowing owls are very opportunistic as they take refuge in pipes, culverts, cracks in old foundations, even abandoned burrows and dens of bigger animals like foxes and coyotes.  An area with multiple burrows or areas for perching adjacent to open areas for foraging and hunting is prime habitat for a burrowing owl that is starting a family.

When planning a project in an area that could have suitable habitat for burrowing owls, it is best to consider contacting a biology consultant first that will determine if the property is currently inhabited by burrowing owls. If burrowing owls are setting up a nest or territory on your property, there are a number of mitigation measures that could help reduce any potential impact. One such measure is conserving the land and postponing construction until after the breeding season. Another is, if permitted by a state wildlife agency, you can also construct an artificial burrow (as seen in the picture to the left) and passively relocate an owl to an adjacent area.

For more information on sensitive species, download our free Species Calendar, which provides survey protocol guidelines for some of the most common focused surveys in Southern California, to help you stay ahead of survey season. And for more information on how these solutions can be possible, simply click on the link below to speak to one of our experts.